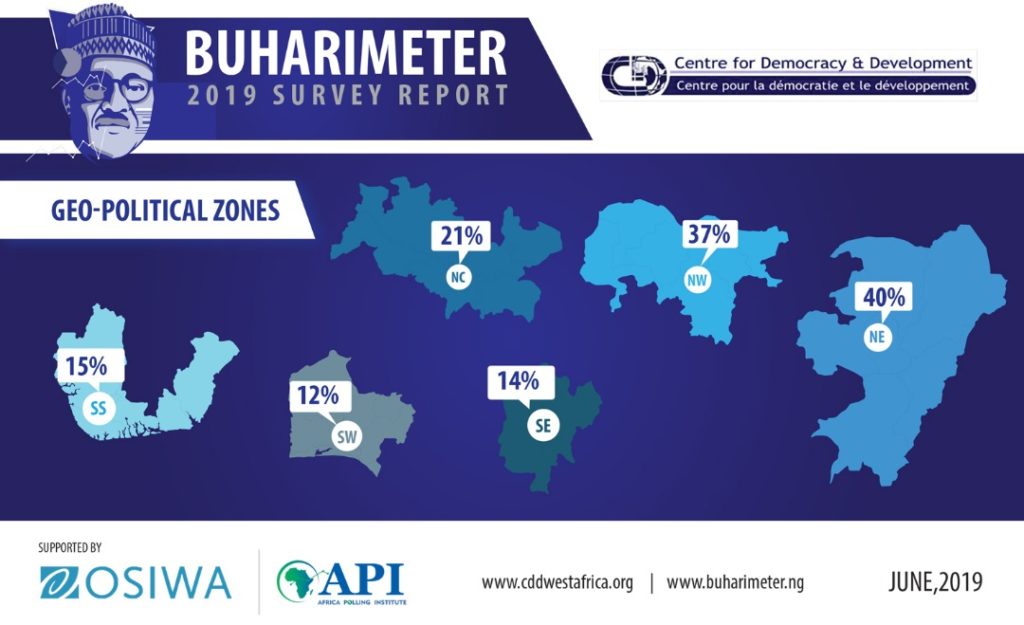 The Centre for Democracy and Development (CDD-West Africa) has recently released the 2019 Buharimeter Survey report. The report amongst other findings identified Job creation, economy, security and poverty alleviation as the most important policy priorities that Nigerians want President Buhari’s administration to address over the next four years of his 2nd democratically elected tenure. Overall, the two broad themes seeking critical attention from public opinion are: the revamping of the country’s economy and improving the state of security.

The past surveys by CDD appraised the performance of President Buhari’s administration and track achievements against campaign promises. However, this latest survey, which marks the 4th in the series of annual perception surveys by the Centre, sought to provide the government with a Citizens’ Road Map of key policy priorities that Nigerians expect the president and his administration to address over the next four years. The survey was conducted on behalf of CDD by Africa Polling Institute (API), and fieldwork was undertaken between the 24th April and 20th May 2019. A total of 5,019 Citizens above 18 years were interviewed from a nationally representative sample covering the 36 states and the FCT. We also interviewed experts on economy and security.

From the survey, Nigerians were asked to identify the 1st, 2nd and 3rd most important policy priorities. The findings clearly revealed that job creation (35 percent) and security (24 percent) are the top two 1st most important policy priorities that Nigerians across gender, age group, locality and geopolitical region want President Buhari to focus on in the next 4 years. On average, emphasis on job creation was stronger in the South (38 percent) than the North (33 percent), while emphasis on security is stronger in the North (33 percent) than the South (14 percent). The highest demand for job creation was from the South-West and North-Central (42 percent for both), while the highest demands for security were from North-East (40 percent) and North West (37 percent).

On the issue of security, the leading and most prevalent security challenge affecting Nigerians is kidnapping (24 percent). Next is book haram and other insurgencies (19 percent), cultism, political thuggery, hooliganism and terrorism (18 percent), armed robbery, theft or burglary (17 percent) and the farmers-Fulani herdsmen crisis (12 percent). While most attention is currently focused on insurgency, it is very clear from the findings that Nigerians are besieged by a multifaceted security crisis

Given the prominence of job creation, which is a derivative of a strong economy, and security as top most important policy priorities that Nigerians want President Buhari to address, the survey also sought policy recommendations to tackle those issues from survey respondents and experts in the areas of economy and security.

On the issue of job creation, the top recommendations elicited by survey respondents require the government to pursue a youth-sensitive job creation program (39 percent), stimulate industrial expansion through both local investments and foreign direct investments (15 percent), and take steps to revive companies that closed down during the recent recession (7 percent). Given that the unemployment problem has both demand and supply side dimensions, experts are of the opinion that supply-side challenges must also be addressed head-on. They recommend urgent steps to overhaul the education system in order to make it more responsive to the needs of industry and improve the quantity and quality of the workforce being pushed into the labor markets every year.

To tackle the security challenges, experts recommend that Government comes up with a clearly defined national security strategy that is both comprehensive and effective in responding to the country’s security challenges. They recommend the need for the President to urgently formulate and implement comprehensive reform of the security and rule of law sectors. This needs to be complemented by constitutional and administrative reforms that will guarantee citizens’ rights, curb corruption, improve transparency and accountability, and enhance service delivery. They recommend the President to establish an intelligence-led security infrastructure with the following elements: i) a more responsive security system that involves redeployment of all security personnel into smaller bases (more spread out) such that every area in the regions can be reached within a short time; ii) use of drones to provide 24hrs sky level coverage of trouble spots and regions; iii) development of security teams that recruit ordinary people in each local government area in the regions with the teams including farmers, market sellers, traders, etc, equipped with an analogue phone, whose charge can last weeks, with pre-programmed numbers to call. The human agents will become a key part of an early warning system that will alert the control room of a problem in their area or of the presence of attackers.

When asked about options to curb corruption, most of the respondents (25%) advised the government to arrest, jail and possibly apply the death penalty to offenders of the country’s anti-corruption code as a strategy to tackle the deep-rooted problem of corruption. The option to put in place measures to bring bribery of officials to a halt and apply the policy of zero tolerance for corruption was advocated by 12% of the respondents. One-in-ten (10%) of respondents advised the government to focus on job creation, poverty reduction and economic development while a similar percentage advocated for good governance, justice and fairness to all citizens.

When asked about the legacy they would like President Buhari to leave behind after his tenure comes to an end, 23 percent of Nigerians want the president to leave a legacy of good governance, good leadership and fulfilment of promises made; 17 percent wants a country with strong and stable economy; and 13 percent wants a legacy of jobs and business opportunities. Given the links between jobs and business opportunities and the strength and stability of the economy, it implies that a combined 30% of respondents desire a legacy of sustained economy growth and stability. In effect, the leading legacy that Nigerians want from President Buhari is a strong and stable economy that is creating jobs and economic opportunities. Others include a legacy of improved security (10 percent); corruption-free country (9 percent); peaceful and united country (6 percent); constant power supply (5 percent); infrastructural improvement (5 percent), improved educational system at reduced costs (3 percent); food sufficiency (2 percent), improved healthcare (2 percent).